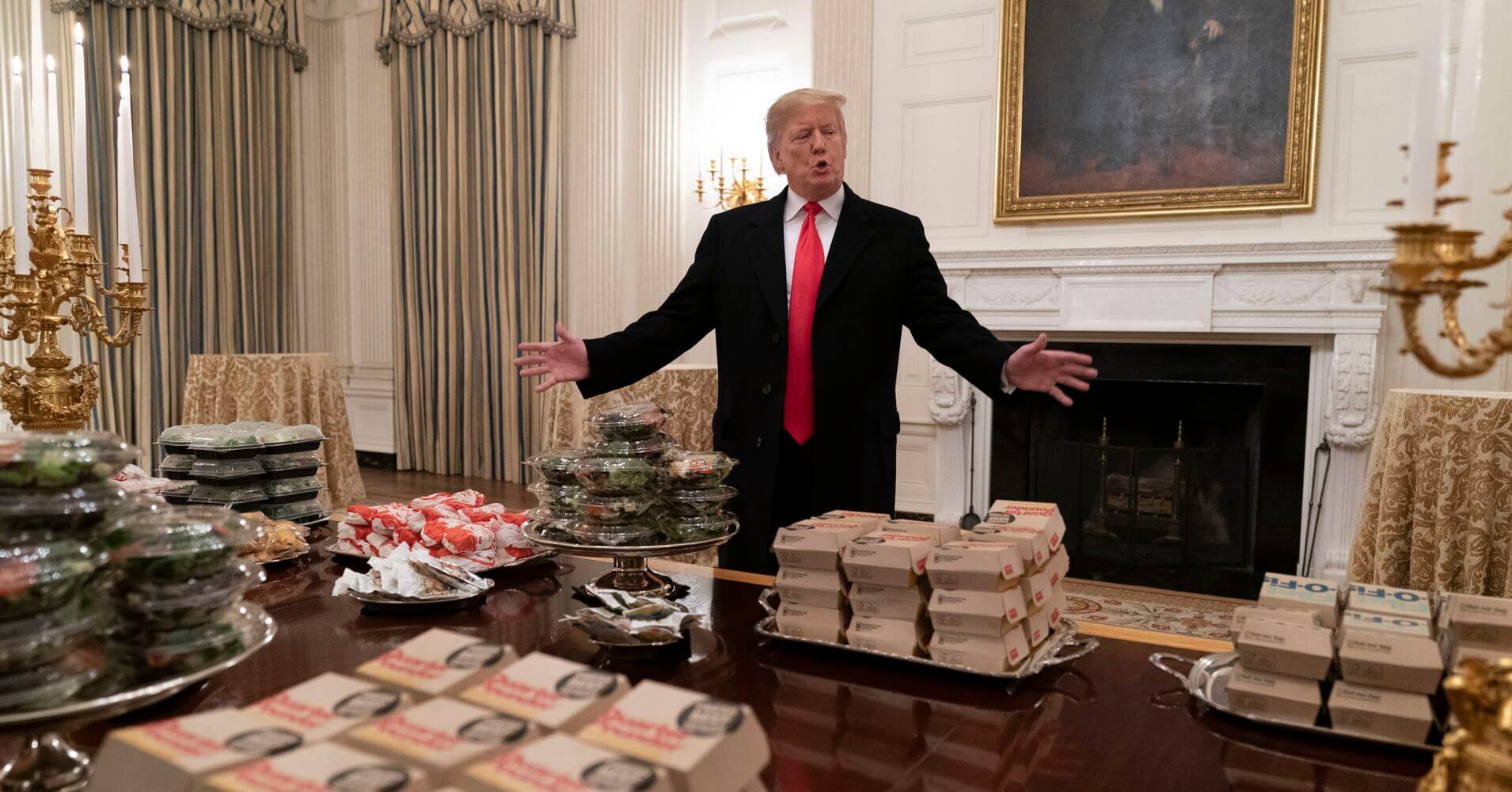 President Trump personally paid for an “all American” feast of burgers, pizza, and fries for a visiting college football champions in White House. President Trump had to do this as the White House chefs are among those federal workers who are furloughed owing to the partial shutdown. It should be reported here that the ongoing shutdown is the longest one in the history of the United States.

On Monday, the Clemson Tigers were invited by President Trump to the White House as they have won the national championship defeating Alabama Crimson Tide.

Having all the Chefs of White House absent due to the on-going shutdown, Trump used his own money to order burgers and fries from McDonald’s and the Wendy’s which he termed as the “great American food.”

He said that he had ordered American Fast food paid by the President himself, the food included lots of hamburgers, pizzas. He also added that he had hoped the team would like those foods more than he could offer.

Standing behind the spread of fast food, in the Dining Room of the White House, Trump said he likes them all, and he would like to see at the end of the evening how many are left.

White House Press Secretary Sarah Sanders said that the President had arranged a fun event to celebrate the College Football National Champion Clemson Tigers. As the Democrats are adamant on refusing the budget for the border wall, there is a shutdown, and the President had to pay on his own as due to the Shutdown, White House staff is also furloughed.

When asked about the choice of McDonald’s or Wendy’s Trump said he chose these outlets as those are all good American stuff, and the national champion team at the White House deserves a little celebration. Praising the team for the game, he said that the team had played fantastic against Alabama.

It was for the second time the Clemson Tigers were invited to the White House. They had visited the White House in June 2017 after winning the previous championship.

The football player walked into the event and found tables loaded with hamburgers from McDonald’s, Wendy’s and Burger King. Another table was full of Dominos Pizzas and fries.

President Trump explained that he had arranged a number of foods that are liked by the Americans throughout the nation and he would like to see how many are left after the end of the event. He also said that because of the shutdown he had to arrange the event like this.

He also added that he was happy about the Republicans sticking together for the greater good of the nation. Emphasizing on the border wall, he said it is needed from the security viewpoint, and the wall should have been done many years before. And he said he is confident that the wall is going to be built this time.

It should be reported here that the partial shutdown has reached 24th day due to the conflict between the Trump administration and the Congress over the funding of proposed U.S. – Mexico border wall. The lives of around 800000 federal workers have been affected by this partial shutdown. The cost of the proposed wall would be $5.7 billion and as per some experts in a week, if the Shutdown continues, the cost to the American economy will surpass the cost of the proposed wall.

The shutdown has closed temporarily many key departments like the State Department and not surprisingly the White House kitchen. Trump told at the event that he did not want to postpone the event until the shutdown ended.

The last record shutdown happened in 1995-1996 at the time of President Bill Clinton which lasted for 21 days.